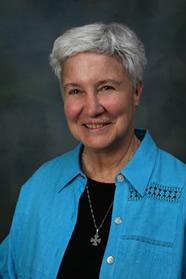 Hildegard was a Benedictine nun in Germany in the 1100’s, a time not unlike the times we live in, a time of a relatively high standard of living but with wars and divisions. She was unusual in many ways. First, she received visions throughout her life, and she not only wrote about them, but she had one of the sisters paint the images she saw. I hope to show you many of these images and some of what she wrote. They give us a view of God and what God calls us to.

Monasteries were the hospitals in that age. Hildegard was a scientist of sorts, writing two books about medicine of her day and the first to write about women’s gynecology.

She was a musician, and left us 77 compositions, religious music that would have been used in the prayers of her monastery. We will listen to some of that.

Hildegard was a prophet, not as in telling the future, but as in speaking for God, calling popes. abbots, and emperors to better, kinder leadership. And the remarkable thing is, they listened to her.