The history of the Spanish Centering Prayer Groups in Central Florida started in 1991, when Ilse Reissner moved to Altamonte Springs from Miami. She had learned and practiced Centering Prayer for a few years with Father 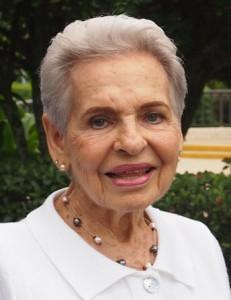 Bill Sheehan, who in turn was one of the first disciples of Fr. Keating. She searched for a prayer group in Orlando where she could continue practicing Centering Prayer. She first met Sister Clair Gregg, also a disciple of Father Sheehan and founder of Centering Prayer in Central Florida. Claire in turn referred her to Basha Perez’s Centering Prayer group in Altamonte Springs. There Ilse met Maria Teresa Torregrosa, a parishioner of Mary Magdalene Church in Maitland, where she directed a Bible study in Spanish. Soon, Ilse joined them. These two friends decided to introduce Centering Prayer to the Spanish speakin

g group and invited Dr. Adalberto Henriquez to give a talk about Father Thomas Keating’s works and Centering Prayer. After Maria Teresa’s death, they regrouped and have been practicing since then on Friday mornings at Mary Magdalene Church, organized by Nena Shidemantle.

Eventually in 2000 Ilse was contacted by some ladies from Annunciation Catholic Church in Altamonte Springs who after attending a Father Ignacio Larrañaga’s course, became interested in learning about Centering Prayer in Spanish. This group still practices on Tuesday mornings.

In 2013, Paulina Nichols was invited by one of our practitioners to attend an introductory workshop, and felt motivated to start a fourth group in South Orlando at St. Luke’s Church on Monday evenings.

From the beginning, the Spanish speaking groups learned about Thomas Keating’s teachings by reading Invitation to Love, which was in English and had to be translated to Spanish by Ilse during each session. It didn’t take long before Fr. Keating heard about the translations and asked Ilse to translate the whole book which was published in 1995 followed by Open Mind Open Heart and Mystery of Christ, and his articles in the Contemplative Outreach newsletter. Other volunteers in the Dominican Republic had already translated other writings. All this material plus many videos and other recordings have been translated and distributed throughout the years in at least 12 countries in Latin America and the Caribbean.

Centering Prayer in Spanish was not only having a great acceptance in Central Florida, it also found followers in many countries in the Caribbean and Central and South America like Mexico, El Salvador, Nicaragua, Dominican Republic, Puerto Rico, Colombia, Argentina among others. In the late 1990s, Ilse and Dr. Adalberto Henriquez saw the need to start an international organization and founded America Contemplativa which later became Extension Contemplativa Internacional, an entity that united the heads in different countries to organize workshops, retreats and talks with Fr. Thomas Keating.

THAT IS HOW THE HOLY SPIRIT WORKS IN OUR LIVES. WE OFFER OUR EFFORT WHICH MANY TIMES IS VERY SMALL, AND HE DOES THE REST!